Despite their conservative reputation, a growing number of veiled Muslim women are taking up football… and giving men a run for their money.

There is a general perception across the globe that if you are a Muslim woman who covers her hair, then you are restricted in the sports you can play – or that you are not allowed to play sports at all. While this is the case among the most conservative, many hijabbed Muslim women play sports, including professionally.

Leena Rodgers is of Syrian and British descent who resides and works in Dubai, UAE, as a social media executive during the day but in the evenings and at weekends, she laces up her boots and turns her attention to football – her hobby and passion. “As a child, I was an all-rounder at sports,” recalls Leena.

At the age of nine, Leena first encountered the beautiful game when she accompanied her mother to her younger brother’s football practice. “I felt this instinctive urge to play too,” she recounts. Leena soon discovered that football had a more powerful pull on her than any other activity, toys or games, and it rapidly became her main source of fun.

Luckily, rather than informing Leena that girls don’t play football, her mother encouraged her talent. Leena began training with a professional coach who was an injured ex-footballer  and it was he who helped develop her skills.  A few years later, Leena started to learn advanced football skills on her own and through practice games.

At first, other girls were unaware that Leena was playing football, as it was still an unfamiliar concept for girls to play such sports around where she lived. It was only when she began secondary school that Leena actually started playing in a girls’ team.

Fortunately for the upcoming generation, the situation in Dubai has changed considerably since Leena’s pioneering days. “I currently coach girls in skills that I didn’t learn until my 20s, and they are only 4-12 years of age,” observes Leena. “It makes me sad to think how many skills I could have been taught that would have enabled me to become natural at them, if I’d been able to start younger.”

From the start of her footballing career, Leena was lucky to enjoy the full support of her family, although she admits that she still gets surprised looks when she informs her extended family that she plays football. “They see a girl and they just don’t think you’re actually any good,” she explains. In reality, Leena was always as good as her siblings and better in certain positions, especially defence.

Football was traditionally a working-class sport played mainly by men. Although this has changed considerably in the West, in the Arab world the sport was almost exclusively male. Leena’s instincts and abilities prompted her to push back the boundaries and to break with tradition. “I found myself good at it, sometimes better than the boys, so it made sense to continue,” she points out. “I was also the star of the defence, so the praise I got for that kept me going. I was depended on and I felt useful.” 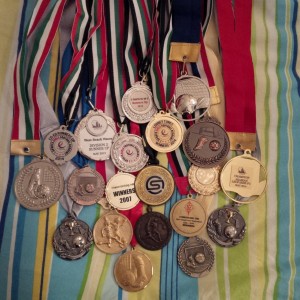 Her passion, talent and determination led Leena to play in the Dubai Football Women’s Association amateur league. She helped her previous team, the Arabian Leopards, to become league champions before moving to her current club, Sandstorm. Leena also plays in a mixed league and takes part in tournaments, which is a new trend that started last year.

Leena has been pleased by people’s positive reaction to women’s football team. “Off the pitch, they are usually impressed and don’t expect it when I say I play football,” Leena describes. But there is a lot of pressure to perform. “You almost feel like you have to justify to them that you are good and just as good as the guys, or even better. The standard is set in their eyes as soon as they see a girl, and a veiled one at that, which makes the task of the female footballer much harder than her male counterpart, as she needs to do double the effort in order to earn the audience’s respect in a way.”

On the pitch, though, it is different story. Male footballers tend to hold back because they are afraid of hurting the female players. “Some think that they shouldn’t challenge you – somehow they do it sympathetically, and some just refuse to play with girls because they think that they are not going to get a tough game out of it,” says Leena. “Also the more annoying part is when they don’t pass to you as much because they think you are going to cost them the game.”

Ultimately, however, Leena believes that her gender and religion do not, and should not, play a role in her sport. “At the end of the day, if you play well, no one cares where you’re from or what you are wearing,” she insists, “they are greedy for your talent and contribution.”

Leena regards football as both a hobby and a way of life, and, as a coach, a profession too. She loves everything about football because “it teaches you team work, reflection, improvement, fitness, excitement, urgency, awareness of your surroundings, concentration, handling situations under pressure – almost everything.”

“It also makes me incredibly happy, so I am so committed to it,” she adds.

The dream of playing football professionally is what keeps Leena’s ambition going but she is quick to point out that “I am where I am right now because I have got a bit of everything in my life – football, photography, social media, coaching.”

Football can affect one’s personal life, especially for women. Leena recognises that time management “is going to be a big factor in my life, knowing when to say no to football (which is extremely hard). I definitely have to fight for time with my family, because I recognise how important they are in my life and they shouldn’t be taken for granted.”

Leena sees a bright future for Arab and Muslim women’s football. “I think it is definitely on the rise and inshallah there will be more professional cups, leagues and tournaments because there is such a high demand for it.”