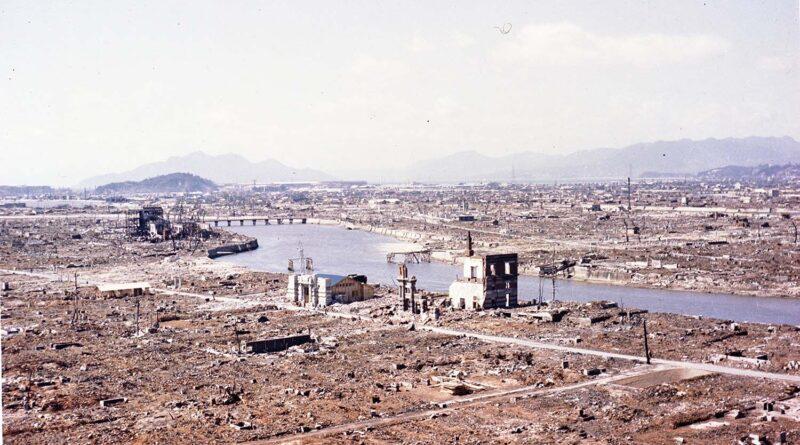 Russia’s invasion of Ukraine, and the major power tension it has created, has sparked fears of a wider conflict. While World War III is unlikely, World Annihilation War I only requires a misstep or miscalculation by one nuclear-armed man or another. That’s why we urgently need nuclear disarmament and world peace.

There is a popular game played by unhinged world leaders. This game does not have a name but we can call it radioactive roulette. Rather than holding a revolver with a single bullet in the chamber to their own temple, this game involves pointing a locked and loaded nuclear arsenal at your rivals and enemies.

Following in the footsteps of Donald Trump and Kim Jong-un and inspired by Captain Jack D Ripper, the latest head of state to play radioactive roulette is Vladimir Putin. Like a jilted and domineering lover who has kidnapped his ex-partner, the Russian president has taken Ukraine hostage and is threatening outsiders with nuclear Armageddon if they dare to try to stop him.

Shortly after Putin ordered the invasion of Ukraine and in response to “aggressive statements” by NATO, the escalating sanctions imposed on his regime by the European Union and the United States, the Russian president ordered his nuclear forces to assume a “special regime of combat duty”. A few years ago, Putin had also threatened to deploy nuclear weapons against “terrorists” in Syria.

Although the general assumption is that Putin is bluffing and would not truly contemplate unleashing nuclear Armageddon, there are too many scenarios in which this kind of brinkmanship could lead to nuclear confrontation.

And Putin does not even have to be mad to act MAD (mutual assured destruction). The use of nuclear weapons, especially tactical ones, though not rational, can be rationalised, even in the face of a ‘deterrent’. For example, many nuclear-armed states view as rational a posture that includes reserving the right to use nuclear weapons first, implying they regard nuclear weapons as offensive, not just defensive. Moreover, George W Bush and his administration wanted to introduce  “mini-nukes” or “bunker busters” into conventional warfare, blurring the lines dangerously between the two.

What this suggests is that we are now possibly the closest we have been to a nuclear confrontation since the Cuban missile crisis. While there has been much speculation about whether we are witnessing the overtures to World War III, it is the prospect of World Annihilating War one that worries and frightens me. It is highly unlikely that countries around the planet will be drawn into a global conflict, it is, however, not beyond the bounds of possibility that the two former Cold War superpowers could be drawn into a planet-destroying war.

It’s not that the nuclear risk disappeared or subsided since the fall of the Berlin Wall. There have been tensions, some visible and others unseen, that could have escalated into nuclear war. For instance, theatre that it has been for the militaries of four of the five nuclear-armed members of the UN Security Council, not to mention nuclear-armed Israel and nuclear-aspiring Iran, Syria has been a perfect example of this inherent danger of unintended escalation.

It is for these reasons that hardcore advocates of a nuke-free world continued to push for full nuclear disarmament, even after the Cold War officially ended. In addition to the likes of ageing CND campaigners, Hiroshima has continuously lobbied for nuclear disarmament ever since the end of World War II.

For anyone who spent part of their life during the Cold War, the hypothetical consequences of nuclear war are synched into their minds. Sting sang about the insanity of mutual assured destruction. His refrain “I hope the Russians love their children too” has recaptured attention, in light of Putin’s recent threats. But in a world armed to the teeth with enough nuclear firepower to annihilate humanity, one wonders whether the Americans, British, French and other nuclear powers love their children too.

I recall when I was about 10 how distressing and terrifying it was to watch the 1980s film The Day After, which depicted the horrendous effects of an all-out nuclear war on ordinary people and apparently left even Ronald Reagan feeling “greatly depressed”.

“Whether it will be of help to the ‘anti nukes’ or not, I can’t say,” Reagan confided to his diary. “My own reaction was one of our having to do all we can to have a deterrent & to see there is never a nuclear war.”

Despite its success, the film, like the anti-nuclear movement in general, failed to inspire the nuclear powers to disarm. To make matters worse, nuclear weapons have proliferated significantly since then, with India, Pakistan and North Korea joining the nuclear weapons club.

What would happen if the so-far unthinkable this time actually occurred?

Russia possesses up to 6,000 nuclear warheads while the US arsenal stands at around 5,500. If a mere 100 of these warheads packing the explosive power of Hiroshima (which is much less than modern missiles) were deployed, it would lead not only to the direct deaths of millions around the impact zones but would also throw up so much soot that it would cause large-scale global cooling, according to models of a confrontation between India and Pakistan. With global temperatures falling 1.8℃ in the first five years, crop yields would plummet, leading 1.3 billion to lose a fifth of their food supply.

In a full-scale nuclear war between the two Cold War superpowers in which they deploy just half of their arsenals, the results would be the effective annihilation of human civilisation. In this scenario, direct deaths would amount to 770 million people and 180 teragrams (i.e. 180 trillion grams) of soot from blazing cities and forests, according to a 2008 study. But that’s just the tip of the devastation.

This would cause a drop of up to 70% in the sunlight reaching the planet’s surface, leading to a nuclear winter in which temperatures in some places would not climb above freezing point for two years straight and rainfall around the world would halve. In this scenario, food production would collapse by over 90%, meaning that people who didn’t perish in the initial explosions would experience a long and painful death through starvation or radiation sickness or both. By the time the climate begins to recover, most humans will have died and many species will have become extinct.

“The price of nuclear escalation is planetary suicide, with no winners at all,” wrote environmental journalist Mark Lynas.

So how do we avoid paying the ultimate price?

This would involve total nuclear disarmament everywhere in the world under strict and independent international supervision. This may require more trust than humans can muster because of the fear that some power or other will maintain a top-secret stockpile or resume clandestine weapons development after all its rivals have been disarmed.

Reaching a global accord of this kind, which has eluded us for decades, will be a task of unprecedented difficulty but the rewards are unprecedented and the risks unfathomable. We must rid the world of this global death cult before it rids the world of (most of) humanity.

However, ridding the planet of the scourge of nuclear weapons is only the first step and not enough for two reasons. First, conventional weapons capabilities and firepower have become so immense that many societies caught up in war nowadays is reduced to rubble. Moreover, there is a growing tendency of conflicts to turn into “forever wars”. Afghanistan, for instance, has been in almost constant war since the Soviets rolled into the country in 1979, while the civil war in Syria shows no clear sign of ending.

Second, there is the risk that the breakout of a war in a nuclear weapons-free world could, paradoxically, involve a nuclear dimension, such as improvised dirty bombs or so-called tactical nuclear weapons developed and stored in secret.

This means that we must exorcise the spectre of war altogether. And the only way to do this is achieving world peace through the strengthening, reform and complete overhaul of international governance.

I know. I know. Nobody is naïve enough to wish for world peace – at least, not in public. Even pacifists and contestants in beauty pageants no longer use this cliché, though some do work as conflict mediators, such as Colombia’s Paulina Vega.

I realise that demanding world peace at a time of escalating conflict sounds dreamy and utopian, even wishy-washy. But the more I think about it, the more the hardened realist and seasoned sceptic agree with the buried idealist within me to conclude that it’s the only way forward for humanity. We cannot afford to wait to rise like a phoenix from the ruins of a future worldwide or world-annihilating conflict, we must prevent it from ever happening.

Far from being a pipe dream, world peace is both the idealistic and pragmatic end game for humanity.