The dangers of a political crusade against Western jihadists

Inflammatory rhetoric and a solely punitive approach to Western jihadists is only likely to make matters worst, and could threaten multiculturalism. 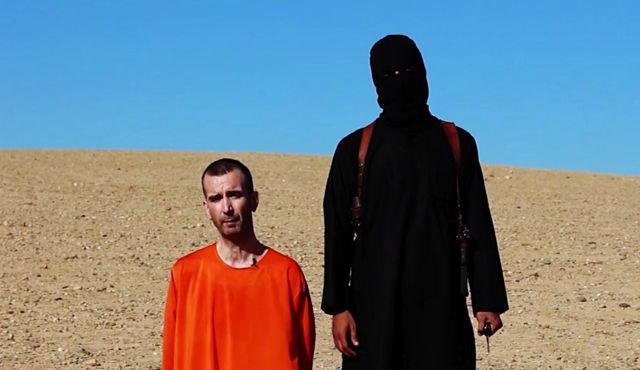 British aid worker Peter Haine is the latest Westerner to be executed by ISIS.

David Cameron, the UK prime minister, has unveiled a controversial raft of measures which he claims will help counter the threat posed by British jihadists fighting in Syria and northern Iraq. These include barring these citizens from re-entering the UK, seizing the passports of suspects before they depart and internally exiling radicals. Other European countries are also considering similar measures. Norway, for example, has announced that it is studying mechanisms for revoking the citizenship of Norwegians who take part in terror operations abroad or join foreign militaries, which would potentially also include Jews volunteering for the Israeli army.

“Adhering to British values is not an option or a choice,” Cameron told the House of Commons. “It is a duty for all those who live in these islands so we will stand up for our values.”

A “duty”, it would seem, if you are a member of a minority, but not if you are a posh Tory. Then, you can ride roughshod over these values and the principles underlying the British legal system, and grant the government even more arbitrary powers to encroach on civil liberties. Fair trials and the presumption of innocence are surely sacred British values, or is Cameron proposing a return to the medieval Germanic practice of  “guilty until proven innocent”? His home secretary certainly is, having stripped at least 37 dual nationality Britons of their citizenship with the stroke of a pen, without any kind of due process.

Fortunately, the British establishment has balked at Cameron’s demagoguery, forcing him to backpedal somewhat from the strident statement of intent he gave on Friday 29 August.

Moreover, “it absolutely sticks in the craw”, to borrow one of the prime minister’s own expressions, and beggars belief that Cameron himself posed a far greater threat to British values and the safety of British citizens than a handful of jihadistst. After all, Cameron supported the illegal and bloody invasion of Iraq, against the will of millions of Britons. And this disastrous enterprise,  which triggered serious blowback, created the vacuum from which ISIS emerged and helped radicalise some Muslims towards Britain, could not have gone ahead without his party’s support.

Should Cameron voluntarily hand over his passport for so recklessly having undermined British values and the security of his fellow citizens? Should he refuse the jet-setting Tony Blair re-entry into the UK and exile him to the Hague?

The rank hypocrisy of politicians and bigots aside, I understand and sympathise with European anxieties, especially following the murder of a third Western hostage held by ISIS, British aid worker David Haines. I witnessed, in the 1990s, the disruptive influence of returning Egyptian jihadists – then from Western-sanctioned Afghanistan. As an agnostic-atheist who believes in secularism and multiculturalism, I observe with alarm the rise, in Syria and Iraq, of violent Islamists who make al-Qaeda look like boy scouts. Their murderous brutality, historical ignorance and cluelessness about religion is worthy of the highest contempt and mockery. But they are a catastrophe for the Middle East, not the West.

That said, Europeans fighting in Syria and Iraq do pose a potential threat to their home countries. However, the British legal system is already equipped with all the legislation necessary and the security services possess the power – too much power – to protect citizens against this threat and to punish perpetrators of atrocities, but this must only occur as a result of free and fair trials.

Moreover, a solely punitive approach is far from useful. In fact, radicalisation experts say it is counterproductive and dangerous. “Treating all foreign fighters as terrorists… risks becoming a self-fulfilling prophecy,” wrote Shiraz Maher and Peter Neumann of the International Centre for the Study of Radicalisation (ICSR) at King’s College London. “It may sound tough, but it isn’t likely to be effective.”

Why? Because “their motivations for travelling to Syria are diverse, and it is wrong to think of them as a homogenous group,” explain Maher and Neumann.

In the fog of war, it is not only unclear just how many foreign fighters there are in Syria but also who they are fighting alongside and to what end. An ICSR report from the end of last year emphasised that the group affiliations for foreign fighters were known in only a fifth of cases. Of the remaining four-fifths, it is impossible to know how many are of the headline-grabbing ISIS variety of grizzly mass murderers, and how many are young idealists drawn to fight against a murderous dictator with moderate rebel groups, like generations of Europeans before them.

Even among those who go to wage jihad, many experience a change of heart once their abstract dreams are replaced by the gruesome reality. “We’re forced to stay and fight, what choice do we have? It’s sad,” one disillusioned jihadist who was afraid to return home admitted to ICSR.

This is the situation many disenchanted Arab jihadists found themselves in when their home countries stripped them of their nationality following the war in Afghanistan, forcing them further down the road to extremism and providing the nascent Al Qaeda with a core of fighters it would otherwise have been deprived of.

Egypt and some other Arab countries have since drawn lessons from this. Rather than banishing jihadists, they have put in place de-radicalisation programmes. Effective de-radicalisation initiatives can reap a threefold benefit in Europe: regaining productive citizens, mitigating a terrorist threat and providing the best advertisement against the lure of jihad for would-be hotheads.

Moreover, radicalisation is not something that only afflicts minorities. Segments of the European majorities are also being radicalised by economic and social insecurity, demagoguery and false narratives, just like Muslims, as reflected by the extremely troubling rise of the far-right and neo-Nazism.

In addition, radicalisation is partly generational. After an implicit post-war social pact in which youth expected to lead better lives than their parents, we have reached an impasse where young people are both worse off than baby-boomers and have dwindling prospects, with rampant unemployment, especially in the 18-25 age group, unaffordable housing, few pension prospects, etc.

And rather than sympathy, the plight of youth has brought them contempt. Contrary to popular belief, it is not older Europeans who are the worst victims of ageism but those under the age of 25 –  a problem that’s particularly acute in the UK and Scandinavia. This has led to huge disillusionment among youngsters, some of whom turn to various forms of radicalism. Minority youth have the additional burden of racial and cultural discrimination.

This reflects how vital it is that the problem of foreign jihadists, troubling as it is, is not blown out of all proportions by vested interest groups and bigots. No more than 500 Brits, by Cameron’s own estimate, have taken up arms in Syria (and mostly for unknown reasons). Yet the prime minister claimed outlandishly that this disparate group, which would barely make up a battalion in a regular army, was the single greatest threat facing the UK, bizarrely overlooking Ukraine and other major crises affecting Europe.

This kind of rhetoric, which panders to the far right and Islamophobic elements in European society, is reckless and potentially perilous. Stigmatising and vilifying minorities or certain ethnic groups can lead to ugly repression and persecution, as Europe’s own history shows and many parts of the contemporary Middle East are currently illustrating. In fact, what history seems to tell us is that when there’s a “problem” with a minority, one should look to the majority first because that’s where the real problem usually lies.

Although some critics are well-meaning and well-intentioned, many of the loudest voices declaring the failure of multiculturalism and demanding that minorities assimilate are those who never bought into diversity in the first place and harken back to an idealised, mythological past in which society was purer and nobler.

But multiculturalism hasn’t failed. Despite its many enemies and its learn-as-you-go approach, it has been generally a roaring success. Only two or three generations ago, western European countries were largely homogenous. Today, they are a cultural kaleidoscope of diversity in which disparate groups manage to live together in peace and relative harmony.

As the once-diverse Middle East increasingly sheds its cultural variety and persecution on the basis of ethnicity and religion grows, Britain and western Europe should cherish and safeguard the beauty of their newfound multicultural reality.

This article first appeared in Haaretz on 4 September 2014.