A mysterious ring in a dead Viking woman’s tomb shows how Northern Europeans came into contact with Muslims and Islam before even becoming Christian. 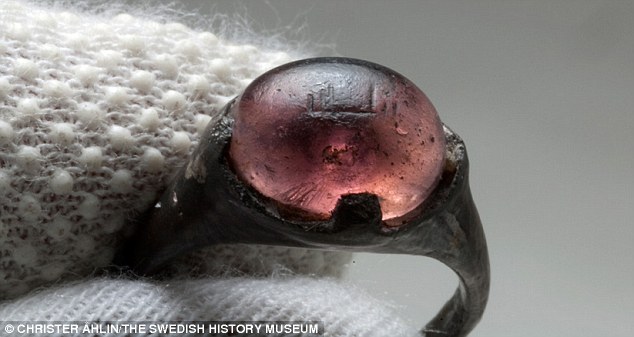 A ring with a cryptic inscription in a foreign tongue turns up in the ancient burial site of an enigmatic woman.

It is the kind of mystery that would have excited the imagination of JRR Tolkien. But this enigma does not unfold in Middle Earth but in the middle ages. The ring in question was unearthed in Sweden and intriguingly contained the Arabic inscription “For/To Allah”.

Recent scientific investigation revealed that what was assumed to be a precious stone containing the inscription was actually coloured glass. But the long-deceased owner wasn’t ripped off, as glass, though pretty common in the Middle East, was a rare and valuable material in Scandinavia at the time.

But how exactly did an Islamic ring end up on the finger of a Viking woman? Short of discovering time travel, we will never know for certain. Several theories have been put forward. One is that it was acquired in trade. In light of the pristine condition of the ring, the researchers behind the lates study posit the intriguing possibility that the ring’s owner may have been a Muslim herself or had travelled to Muslim lands.

With all the fears and fear-mongering about the “Islamisation of Europe”, including in Sweden, it seems outlandish that a native Norsewoman who lived over a millennium ago would be so comfortable with Islam that she would wear a ring with the Arabic word for God engraved on it, and this at a time when Christianity had barely penetrated the lands of Odin, Thor and Freya.

But it is not as bizarre as it may sound. Even though we unfairly tend to associate the Vikings today with raping, pillaging and burning, there were Nordic tribes who headed eastward, not as conquerors but as merchants (and sometimes mercenaries and slave traders). The euro may draw people to Europe today, but the mighty dirham pulled Europeans towards the Middle East a millennium ago.

Although a significant number of their descendants today complain about immigrants, these early Norse-people migrated east, drawn by the opulent riches and high tech of the Middle East, then the centre of global trade.

On their voyages, they encountered Arabs – to much mutual curiosity and dismay. Since Scandinavians were not great writers at the time, the picture we have is rather one-sided, as it is based on the prolific output of contemporary Arab chroniclers, who wrote to satisfy a large and popular market for travel writing.

Interestingly, Arab writers left us with a much more sympathetic and nuanced picture of the Vikings and their ways than Europeans did. In fact, modern scholars are drawing heavily on these ancient Arab accounts to fill in the holes in our knowledge of the Norse tribes. So, in addition to “threatening” Europe’s cultural heritage, it seems Muslims have also helped to preserve it.

One of the most detailed and fascinating accounts was penned by Ahmad ibn Fadlan (played by Antonio Banderas in the fictional Thirteenth Warrior), who was a tenth-century traveller and diplomat for the Abbasid Caliphate, which bears almost no resemblance to ISIS’s modern-day caliph-hate.

Although his writing tends to exhibit some of the cultural superiority and condescension we tend to associate with certain brands of Orientalism today – such as lumping together a complex tapestry of tribes and peoples into a single homogenous “other” – he also expresses sympathy and a willingness to understand these “Rus”, as he called them.

Like later stereotypes of the “Noble Savage”, Ibn Fadlan waxes lyrical, confessing: “I have never seen more perfect physiques than theirs – they are like palm trees, are fair and reddish.” Another Muslim traveller, the Persian Ibn Rustah, praised them for their heroicness and loyalty.

Interestingly, Ibn Fadlan witnessed many exhibitions of fornication and drunken behaviour, and yet, despite being an Islamic scholar, or Faqih, failed to pass, in a display of admirable academic neutrality, any moral judgement on what he described.

This may seem odd, given how puritanical Islamic scholars tend to be today. But when considering how freely alcohol flowed in the Abbasid caliphate, the odes to wine penned by Arab poets and the fact that medieval Islamic scholars often authored sex manuals, including one with the beautifully sensual title of The Perfumed Garden.

While Ibn Fadlan barely batted an eyelid at the intoxication around him, he was totally grossed out by the Vikings’ notions of hygiene. Probably perfumed and dressed in fine silks, from a dandy culture where daily bathing was a norm and ritual washing took place five times a day, his disgust is palpable. “They are the filthiest of all God’s creatures,” he declaimed. “They do not clean themselves after excreting or urinating or wash themselves when in a state of ritual impurity (i.e., after coitus) and do not wash their hands after food.”

There are also moments of mutual culture shock. Ibn Fadlan is taken aback by the raping and human sacrifice of a female slave in the ship burning funeral of a chieftain, which must have seemed barbaric to his Abrahamic sensibilities. The Vikings were also aghast by Islamic burial practices. “You Arabs are a foolish lot,” one remarked, “you purposely take those who are dearest to you and whom you hold in highest esteem and throw them under the earth, where they are eaten by the earth, by vermin and by worms.”

Some of the Vikings Ibn Fadlan encountered had converted to Islam, but many others were too attached to their native religions or held back because they would miss pork too much.

Given the fact she was buried and not burned, the mysterious Viking woman with the ring may have been one of these converts returned home, or a Norsewoman who had come into contact with Muslims during a voyage east.

This just goes to show that Islam has deeper roots in Europe, even its remoter corners, than most Europeans appreciate.

This article first appeared on Al Jazeera on 2 April 2015.