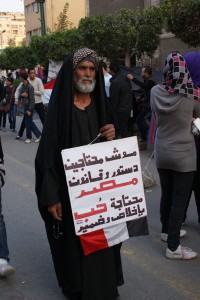 When millions of Egyptians took to the streets last year and chanted “the people want to bring down the regime,” they were clear about what they wanted the regime to do, but not about the kind of system they would like to replace it with. Since Hosni Mubarak’s downfall in February last year, debate over the country’s identity has been fierce amid a power vacuum characterised by no clear plan or time frame for a peaceful transition of power and to democracy.

The intensity of the dispute peaked this week following the appointment of the 100-member constitution-writing committee by the parliament – composed mostly of Islamists. The interim constitutional declaration grants the parliament the power to “elect a provisional assembly composed of 100 members which will prepare a new draft constitution”.

Exercising this right, the Islamist-dominated parliament allocated about two-thirds of the 100 seats to figures from an Islamist background. The committee, of which 50% are members of the parliament, met for the first time this week to plan their task – an expectedly difficult one with three powerful ideological and political groups having conflicting interests in the writing of the constitution.

Egypt’s military rulers, the Supreme Council of Armed Forces (SCAF), are looking to maintain and entrench their privileged position in the new constitution. SCAF wants to be independent of any elected body’s supervision and key to this would be no parliamentary oversight over its finances. A list of SCAF-sponsored supraconstitutional principles, issued by the deputy prime minister Ali al-Selmy last autumn, was rejected by liberals, Islamists and leftists amid concerns of constitutionally establishing a deep military state. Article 9 of the document explicitly states that SCAF is solely responsible for all matters concerning the armed forces. It also grants the military the right to approve all legislation pertaining to its affairs including its budget.

The second player is the Islamist parliamentary bloc, who argue that they are currently the only elected representative authority in the country and that their choice would be the most reflective of the people’s choice; not to mention that they have the constitutional power to elect and appoint a constitution-writing committee.

An Islamist-designed constitution raises concerns from the third group – minorities and non-religious political forces, including different shades of leftwing and liberal politics, that would like the constitution to secure social, political and personal freedoms and equality rather than emphasise Egypt’s religious identity and discuss the military budget. Their argument is that a “temporary” parliamentary majority, that will be gone in four years, should not have a monopoly right over drafting a “permanent” constitution that will govern Egypt for generations to come.

Despite possessing only minimal representation in parliament, the political left still exercise some degree of influence by dominating civil society, especially human rights organisations, while the liberals maintain control of the media and much of the economy.

There are also fears that a potential showdown between the military and the Brotherhood could have a devastating effect on the country’s transition to democracy in a repeat of the 1954 scenario when the Brotherhood clashed with the then military rulers over writing the constitution and the sharing of power, especially after a public exchange of aggressive statements a few days ago over the Brotherhood’s demands for the dissolution of the military-appointed government.

The constitution, however, is not the right place to debate these matters. The constitution’s role should be to tackle fundamental issues such as personal freedoms, equality before the law, citizenship and democracy. On top of this, it should organise the relationship between the executive, legislative and judicial powers while setting the stage for all the political powers to compete equally and freely. Issues that are fluid and prone to change, such as the military budget and religious identity, should not be entrenched in the document.

Risking even further Islamist domination, the strife and disappointment have caused many non-Islamist members to withdraw from the committee as a gesture of protest against the under-representation of many groups.

Ziad Bahaa al-Din, a lawyer and parliamentarian who withdrew from the committee, wrote in an article for al-Shorouk newspaper that was translated into English by the Arabist blog saying that “all of Egypt – including all its legal, constitutional and academic experts, labour leaders, NGOs, judges, intellectuals, and writers, men and women, Muslims and Christians, people young and old – […] will be represented in the Constituent Assembly by 50 people, while the MPs alone have reserved the remaining half for themselves.”

The Brotherhood and other Islamist groups should realise that in drafting a constitution, parliamentary representation should be irrelevant, not just because it is temporary, but also because bigger religious or political groups should not be able to grant themselves greater rights. Democracy, equality and human rights should be the backbone of the new constitution; the role of the constitution in a democracy should be to limit, not increase, power of the majority over the minority.

This article was published in The Guardian‘s Comment is Free on 31 March 2012.

The ban on alcohol at the FIFA World Cup out of respect for Islamic culture ignores pertinent facts. Although intoxication is technically haram in Islam, there have always been Muslims who drink and alcohol has always been legal in some Muslim societies. #FIFAWorldCupQatar2022

It was bad enough when Black Friday was confined to the United States. The mindless adoption of this vacuous shopping festival in countries that don't even celebrate Thanksgiving reveals how far the worship of hollow consumerism has spread.

Despite my faithlessness, one aspect of Islam that I have not lost is to abide by the prohibition on gambling. This is because this particular 'sin' is rooted in rationality. Even though a vanishingly small minority of gamblers get lucky, the house invariably wins.

As we enter a grim winter of skyrocketing prices and spreading (energy) poverty, it was heartening to read about a landlord who not only refuses to hike up his rent but has actually decided to reduce it by 20% to help his tenants of limited means make it through the cold months.

"It gives the impression to fans or other air travels that they can fly without harming the climate. And that's just far from true." CMW's Khaled Diab (@DiabolicalIdea) spoke to @semafor about the #FIFAWorldCup's far-fetched "carbon neutrality" claim. pic.twitter.com/DMf9kOPHdI

@TracyQuanNYC Indeed. Some Victorian men escaped the strict sexual mores of home and travelled south where they could more comfortably come out of the closet. Orientalist Richard Burton even fantasised the existence of what he called a "Sotadic Zone".

Belgium's Foreign Minister Hadja Lahbib wore the #OneLove armband while cheering on the Belgian national side at the #FIFAWorldCup. She even trolled FIFA President Gianni Infantino by chatting with him while wearing the armband. 👏🙌 twitter.com/hadjalahbib/st…

Qataris widely regard homosexuality as a western import and Europeans tend to view Qatar's homophobia as Arab/Islamic. But the Gulf's "anti-sodomy" laws date back to the British Empire. Before that, homosexuality was tolerated and often celebrate in the Arab world. #WorldCup2022

@sarahposner @WIRED I wonder if Twitter algorithms have changed since Musk took over or if it's down to a mass exodus of progressives. But I've noticed a pronounced downturn in engagement with my tweets. I wonder if others are experiencing the same.

It is symbolic, in a grizzly sort of way, that the latest mass shooting in the US, in which the gunman killed six people, occurred at a Walmart. Walmart is one of America's largest gun distributors and has even had Black Friday sales on firearms. bbc.com/news/world-us-…