Citizenship is a universal right, even for ISIS members

The death of Shamima Begum’s infant son underscores the injustice of depriving alleged terrorists and jihadis of their citizenship. It also sets a dangerous precedent that can come back to haunt and hurt everyone in society. 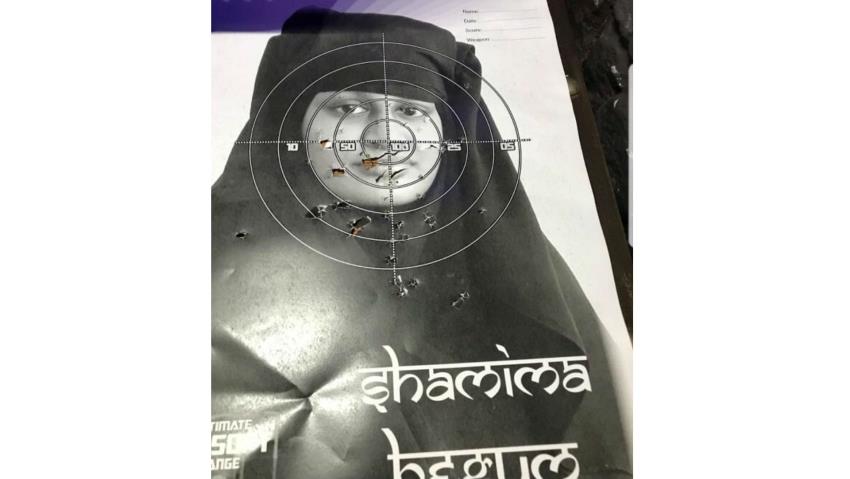 A shooting range in the UK has been using an image of Shamima Begum for target practice.

Shamima Begum, a teenage girl who ran off, as a minor, to join the Islamic State (ISIS) has had her British citizenship revoked at the stroke of a pen, following which her innocent, blameless three-week-old son reportedly died of pneumonia in a Syrian refugee camp.

Meanwhile, across the Channel, in Belgium, which has also been stripping some extremist Islamists and jihadis of their citizenship, Belgians who voluntarily joined Hitler’s Waffen SS not only have retained their citizenship but still receive a state pension from Germany of up to €1,275 per month, according to Belgian parliamentarians. Worse still, Belgians who were subjected to forced labour by the Nazis allegedly receive a measly €50 a month.

An unknown number of British former SS members, who are living in peaceful retirement in the UK, are also still receiving German pensions, according to the Belgian MPs. Needless to say, they have not had their British citizenship revoked.

Despite extensive searching, I cannot find any records of British Nazis losing their citizenship, yet Britain managed to survive the existential threat of World War II without resorting to depriving people of their nationality. Even those Brits who fought for Hitler’s army, with a few exceptions who were executed for treason, were allowed to reintegrate into society after serving a prison sentence.

Moreover, many British Nazi collaborators faced absolutely no consequences for aiding the enemy, even when it involved war crimes. For example, official papers declassified in the 1990s show the extensive level of collaboration officials and some citizens in the German-occupied Channel Islands offered the Nazis, including in the deportation of 2,000 residents of the islands to concentration camps. Rather than try and prosecute the collaborators and set in motion a reconciliation process, the British government decided to sweep the sordid affair under the carpet.

While there is no excuse for not bringing war criminals and abusers to justice, there are sound historical reasons for why postwar governments resisted the lure of purging unwanted citizens from the record and, for the same reasons, we should not tolerate governments seizing the power to revoke citizenship, no matter the justification.

At the end of the war, memories were still fresh of the path from the notorious 1935 Nuremberg laws – including the Reich Citizenship Law, which stripped Jews of their German citizenship and demoted to the status of inferior “subjects” – to the genocide of the Jews and other minorities, and the persecution of groups deemed undesirable by the Nazis.

Invoking Nazi Germany may strike many as unnecessarily alarmist, but the road from discrimination to persecution can be a surprisingly short and rapid one. Although I am hopeful that we have enough checks and balances in place and have learnt enough from the past as not to return to its darkest episodes, it is worth considering that the Holocaust appeared to be a remote possibility when Hitler rose to power, which was at a time when German Jews enjoyed unprecedented rights and prominence under the Weimar Republic.

It is also worth recalling that the Nazis, faced with stiff opposition from leftists and liberals, started off gradually by, first, in 1933, stripping the citizenship of naturalised Jewish citizens who had immigrated from eastern Europe.

Beyond the possibility of future persecution, the blatantly discriminatory nature of instating a de facto two-tiered citizenship system is unfair and an extremely risky endeavour that could backfire.

Modern legal systems are supposedly based on the equality of citizens in the eyes of the law – hence the depiction of Lady Justice as blindfolded. If the potential danger posed to other citizens is good reason to deprive someone of their citizenship, why has a fanatical teenage mum lost hers, while neo-Nazi and other violent far-right extremists get to keep theirs? How does this selective system defend against the immense threat from fascists and neo-Nazis, like the mass-murdering Norwegian Anders Breivik, or the American disciple his work inspired, who has been arrested for allegedly plotting a major killing spree?

Applying the principle of revocation of citizenship only to naturalised citizens, dual nationals and citizens who are (theoretically) entitled to citizenship elsewhere, who have been almost exclusively Muslims, is an expression of blind bigotry, not blind justice.

Stripping jihadis and extremist Islamists of their citizenship stigmatises the Muslim minority by implying that Muslims must “earn” their citizenship and prove their loyalty, while citizenship is an unshakable birthright for their compatriots that cannot be taken away, no matter what.

Moreover, if citizenship must be earned, and not granted, why do European governments expect other countries to take in their refuse? Take Shamima Begum. She has no connection to her ancestral Bangladesh, which has refused to take her. This means not only that Begum faces the illegal prospect of becoming stateless, with her baby raised in a form of inhumane limbo, the British government has effectively left the burden of hosting her on ISIS’s victims.

The political rhetoric used to justify this kind of (mis)carriage of justice is extremely worrying and has far-reaching implications. For instance, British Prime Minister Theresa May issued a statement when she was home secreatry which claimed: “Citizenship is a privilege, not a right, and the Home Secretary will remove British citizenship from individuals where she feels it is conducive to the public good to do so.”

The absurdity of this logic becomes immediately apparent if we take it to its logical conclusion. If citizenship is a privilege, what have other citizens done to earn it, aside from being born with the right background? If citizenship can be revoked for “the public good”, who can and who should we trust to decide and define this general interest? If the justice system is founded on equality, why should other citizens not be judged by the same yardstick, and what kind of hell would we have created if every person who does not live by or support a certain set of “values” is liable to be erased from the record?

And there are already early signs of this kind of serious and troubling mission creep. At the end of last year, in a landmark ruling, a British-Indian paedophile was stripped of his citizenship and was set to be deported to India. This is an extremely dangerous precedent not only for migrants but also for sex offenders as a whole. And if one group of social pariahs and undesirables can be deprived of their nationality and deported, why would a future unscrupulous government stop there?

This could reach other groups. If Muslims can be treated like this, why not other stigmatised minorities? The extraordinary powers seized by numerous governments following the 11 September 2001 al-Qaeda attacks helped pave the way, in the UK, to the Windrush scandal, where Afro-Caribbeans who have been in the UK for (almost) all their lives, and now have British children of their own, have been deported or face deportation. Some were reportedly holders of British passports, while others were eligible but had never applied. Echoing, on a smaller scale, the 19th-century practice of sending unwanted citizens off to penal colonies, the deportations are being justified by the fact that the deportees allegedly committed criminal offences, some very minor.

If minority groups are targeted for the threat they allegedly pose to public safety and security, either as terrorists or criminals, what is to stop violent political fringe or opposition movements from being so targeted in the future? And if the political fringe is one day targeted, why not all perceived “enemies of the state”?

If we are not careful, our fear of violent extremists could hand increasingly authoritarian leaders in the West the power to appoint themselves gatekeepers and defenders of the nation and the national interest. If you want a taster of what this could be like you need only look to the Gulf states who have weaponised citizenship and have been stripping dissidents (and their families) of their nationality.

Citizenship is an inalienable right for everyone and no matter how terrifying and reprehensible we find terrorists, they also have human rights. Society can make these violent extremists pay for their crimes without abandoning the values of human rights, judicial impartiality, democracy and decency.

This is the updated version of an article which was first published by The New Arab on  February 2019.