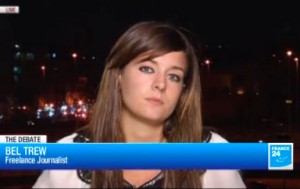 Bel Trew is a Cairo-based print and broadcast journalist specialising in the Middle East.

She reported from Egypt during the Egyptian revolution and is based in the capital writing on the region.

A graduate of Cambridge University, Bel has worked in print, television and radio, with the The Times, BBC TV and radio, The Daily Beast, Al Jazeera, The New Statesman, Huffington Post, The Independent, The Guardian, Russia Today, France 24, PBS, Ahram Online, Intelligent Life, The Evening Standard, Stylist, Tatler and Company, among others.

Bel has worked in The West Bank, Palestine, grew up in the Gulf and has travelled extensively throughout the Middle East.
Her website is http://beltrew.com/
Articles
Egypt’s return of the “noble” outlaws