Hebron settlers: The art of peace

The settlers in Hebron are widely regarded as the enemies of peace. That’s why I, as an Egyptian, decided it was essential to get to know them. 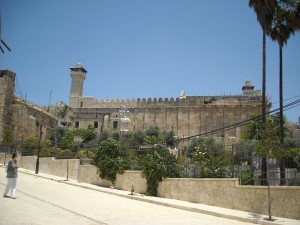 The Cave of the Patriarchs/Ibrahimi Sanctuary. Photo: ©Khaled Diab

Meeting outside the Cave of the Patriarchs in Hebron, aka the Sanctuary of Abraham, seemed to be not just convenient but symbolically fitting. After all, it is this holy site which is the main reason why a few hundred religious settlers stubbornly insist on remaining in Hebron, despite being labelled as an “obstacle to peace”, not only by Palestinians and the international community, but also by many Israelis, including descendants of the city’s original Jewish community.

My guide and interlocutor was David Wilder, the veteran American-Israeli spokesman for the settler community in Hebron. With his long, flowing grey beard, Wilder had something of the patriarchal look about him, while the gun holstered on the side of his trousers bore a silent testimony to the Wild West Bank lifestyle of the settler community here.

Owing to unforeseen illness and a trip to the United States on Wilder’s part, it had taken several weeks for me finally to get this audience. During the long wait, I couldn’t quite shake the suspicion that Wilder was not exactly wildly enthusiastic about a visit from an Egyptian journalist, who was likely to be, at the very least, unsympathetic, if not outright hostile, towards his community.

But persistence ultimately paid off, as undoubtedly did the curiosity factor, which some Israeli friends suggested would prove irresistible, although others worried about the prospect of potential hostility. Personally, I expected civility but didn’t rule out other possibilities.

As we headed to and entered Wilder’s office in his battered old car, he was curious to learn more about me and what had motivated me to make this visit. 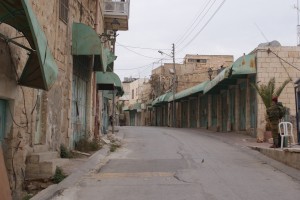 Part of my motivation was undoubtedly curiosity. I have visited the Palestinian side of Hebron on several occasions, both with a Palestinian human rights group and on my own or with friends. I have seen for myself the massive humanitarian impact, including the complete closure of all businesses on al-Shuhada street and in parts of the old city’s souq in the Qasbah, not to mention the severe restrictions on movement this draconian security entails. I have also spoken to Palestinians affected by the settler presence.

And now I wanted to see how the other side lived and what made them tick. In the Art of War, Sun Tzu says that if you know your enemy and you know yourself, then you can win a hundred battles without suffering a single loss. I don’t know if this is entirely the case or not, but in the Art of Peace to which I subscribe, knowing the enemies of peace, not just its friends, is essential if we are to find a way to end the battle and cut our losses.

Besides, I’m not one who likes to make easy and lazy judgements and I am a passionate believer in the idea that everyone has the right to have their case heard. With this in mind, I decided that it was important for me to cross the line, and it was a little surreal to see the inside of the settlements that stood behind the thick gate outside which I had stood. 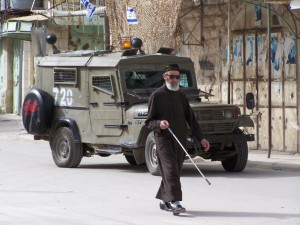 On a couple of occasions, I have stood outside the gate of the Beit Romano settlement to protest the weekly Shabbat “Qasbah tour” which leaves from there, because of the heavy Israeli military guard it requires and the barring of Palestinian entry to the old city during the tour.

It is called a tour but it is more like a tour of duty. First, an advance party of heavily armed and nervous IDF soldiers, some looking little older than child soldiers, leaves the settlement, pointing their rifles in all directions in an absurdist mime. Their mission: to check the route. Some time later, out come the “tourists” and their “guide”, surrounded on all sides by even more IDF soldiers – all provided courtesy of compulsory national service and the Israeli (as well as American) taxpayer.

The last time I did it, I even draped a Palestinian keffiyah – one that was actually made in Hebron and not in China – which I had just purchased from a shopkeeper who had seen his business reach near collapse due to the closure of most of the shops on his street. This acted as a provocative red rag to the younger settlers on the tour and the beleaguered Israeli soldiers guarding them had a hard time keeping them away from me, which led them to implore me to move away, which I refused to do arguing that I had as much right to be on this street as they did. Reflecting on this incident, I wondered what Wilder would make of it. 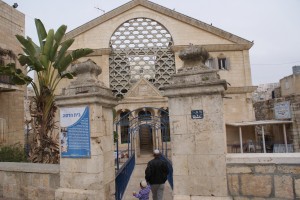 Beit Hadassah in Hebron, which once housed a clinic and now contains a museum dedicated to the 1929 massacre. Photo: ©Khaled Diab

As I toured Jewish Hebron with Wilder, I figured that I must have been the only Arab there and wondered what the settlers would make of me if they found out that I was an Egyptian, especially given the regular reports of settler violence and attacks against Palestinians and their property. I saw a couple of yeshivas, an archaeological site which seemed to confirm the Biblical narrative in Wilder’s view, and a historically de-contextualised museum dedicated to the tragic 1929 Hebron massacre.

In visiting the Jewish settlements of Hebron, I wanted to develop a deeper understanding of what motivates a small group of people to live amid such hostility and exist in self-imposed isolation, not only from their physical neighbours but also from their co-religionists and compatriots.

The long, in-depth conversation I had with Wilder, who is an eloquent and passionate speaker, was enlightening, and that is why I have decided to serialise it in full. To me, it not only revealed a group of people with a worldview that is so completely different to my own that I felt I had indeed landed there “from the moon”, as Wilder invited me to do at one point.

One major impression I got from our conversation was not only the sense of divine entitlement and righteousness the settlers possessed, but also their rather paranoid narrative of victimhood and historical grievance, some of which is justified, despite the substantial power they yield. They feel not only hated by the Arabs, but misunderstood by Israelis and unfairly labelled as extremists. They criticise and lament Arab rejection of their presence in Hebron and their identity, yet they reject Palestinian identity and, judging by Wilder’s discourse, are opposed to granting them equal rights.

Although I do not believe in God-given rights, given the religious importance of Hebron to Jews and given my unwavering belief in multiculturalism, I believe that a Jewish presence in Hebron is necessary. However, that presence must be one built on equality and justice, not on segregation, oppression and occupation.

Informative as my encounter with Wilder was, it did not increase my optimism for the future. Following our encounter, I was left with the impression that the situation in Hebron, and the West Bank at large, is as intractable as ever, with the ideological settlers holding the Palestinian and Israeli public to ransom.

Nevertheless, I am still convinced that it was a useful exercise, that it helped humanise the situation and that it is through continued dialogue that the walls of prejudice and distrust can be gradually broken down to lay the groundwork for peace. In addition, the first step to resolving a problem, no matter how insoluble it seems, is through building a deeper understanding of the situation and the key players.

Now this preamble has gone on long enough. I’ll let the interview with Wilder speak for itself and you can make your own mind up about the thorny issues it raises. The interview will be serialised over the next couple of weeks, so do check back for the latest instalments.