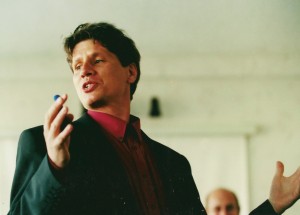 Barry van Driel was educated at universities in the Netherlands and the United States. He holds a graduate degree in the Psychology of Culture and Religion with a specialization in education. He joined the staff of the Anne Frank House in 1992, where he is now international director for teacher training and curriculum development. He has been the Editor in Chief of the international academic journal Intercultural Education since 2000 and the Secretary General of the International Association for Intercultural Education since 2002. Barry is also senior education consultant to the Office for Democratic Institutions and Human Rights (ODIHR) in Warsaw as well as a consultant to UNESCO and the FRA (Fundamental Rights Agency). His most recent books include Variant Lifestyles (with Bram Buunk, Los Angeles 1986) and most recently Confronting Islamophobia in Educational Practice (London 2005) and Challenging Homophobia (London 2007).

He is reachable at barry@iaie.org