Intimate strangers in a splintering world

Multiculturalism is enriching and as easy as child’s play. But as the winds of intolerance blow harder, it may become a liability for my son and his generation. 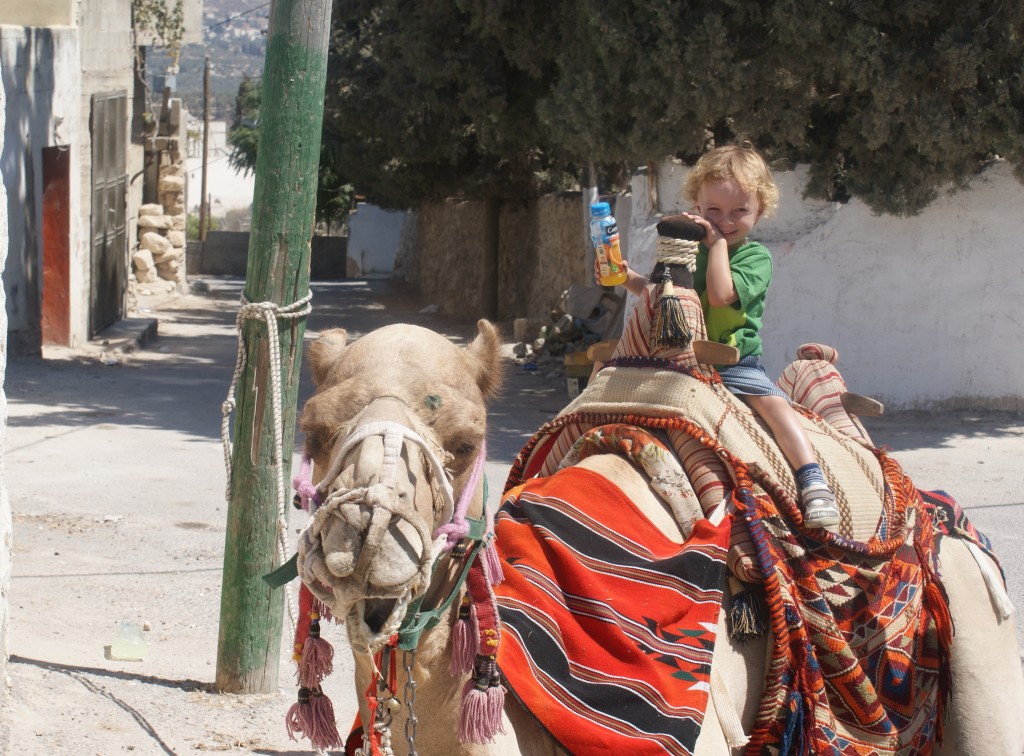 You don’t need to belong to a place to have a sense of belonging and you can be a foreigner in your own land. Image: ©Khaled Diab

As Iskander and I enjoy a rare sunny Sunday during this northern European spring that has not yet found its spring, our son quite literally sings the praises of multiculturalism, as he recites nursery rhymes and songs he likes in different languages.

While I bask in his sonshine, I marvel at how the intricacies of different cultures and identities become, in his tiny hands, quite simply child’s play.

Not only does he act at home in his two native cultures, Belgium and Egypt, he also took the complexities of the Holy Land, where he spent more than half his short life, in his, at first wobbly, stride. In that sun-kissed, trouble-drenched corner of the world, his blond locks went down a treat on both sides of the bitter divide, as did his nonchalance, charm and tenderness.

When we returned to Belgium recently from our 20-month stint in Israel-Palestine, we were a little concerned about how long it would take him to adjust to life back in Europe, especially the demanding task of starting pre-school.

But he took to it like a rubber duck to bubbly bathwater. Within a few short weeks, Dutch switched back to being his dominant language after a hybrid Palestinian-Egyptian Arabic had been during most of our time in Jerusalem.

Multilingualism, as researchers are increasingly discovering, enhances children’s cognitive abilities and helps them to do better in school. As the world continues to shrink, Iskander’s polyglottic childhood should place him in a good position to enjoy an international adulthood.

Although like any parents we hope that the future is bright for our son, there are a number of clouds on the horizon that trouble me. My wife and I take the benefits of multiculturalism as a given, as do most people in our circles. Not only is the microcosm of our family confirmation of this, but our own experiences back up this conviction.

For my part, I find that dividing my childhood, youth and adulthood between the Middle East and Europe has been a generally enriching experience, despite certain challenges – I feel both out of place and at home everywhere. My well-heeled Belgian wife developed a keen wanderlust early on which influenced her choice of studies, her extensive travels and her choice of careers.

Iskander is the next step along this evolutionary line. While both my wife and I grew up in monocultural families, Iskander has been born into diversity, with all its inherent richness and complexities.

My own personal experiences have taught me that in human interactions personal culture and disposition are more vital factors than collective culture. For example, my wife and I – both secular progressives with an inclusive, humanist outlook – have far more in common with each other than we do with our supposed cultural kin.

But as the winds of monocultural intolerance swirl evermore-menacingly overhead, not everyone sees the situation this way. A growing number of people (re)subscribe to the notion that there is an innate, cliquey cultural essence which unites a certain group to the exclusion of others.

This is partly a by-product of the social and economic alienation many people encounter, and the consequent desire to manufacture a sense of belonging. As I get older, I’m growing to understand better the attraction some people feel to having deep roots: the security derived from the familiar, the ability to read the various chapters of your life inscribed on every paving stone for miles around, and the convenience of being in the comforting proximity of family and lifelong friends.

But you don’t need to belong to a place to have a sense of belonging and you can be a foreigner in your own land. I know people who have lived in the same place their entire lives and feel alienated from their surroundings. I know others who move constantly but settle into each station as if it were their final destination.

With petty nationalism seemingly on the rise, partly on the back of the crisis afflicting global capitalism, this exclusiveness often manifests itself along nationalistic, even patriotic, lines. Given our aversion to nationalism, we hope that Iskander will grow up to become a proud citizen of the human nation.

But I appreciate that peer pressure, or rejection, may force him to jettison, or at least to underplay, one of his identities. And so, paradoxically, he may come full circle: returning to one of the monocultural roots of his multicultural parents.

Although balancing national identities can be done relatively painlessly, especially between societies that are not in conflict, a tougher nut to crack is religion. Of course, Iskander is still too young for religion to be a real issue, but we plan to raise our son to appreciate the beauty of his triple heritage – the secular, non-aligned humanism of his parents, his father’s Muslim and his mother’s Christian heritage – and to choose his faith for himself.

Even though the millet system, which gave a high degree of autonomy for recognized religious communities, was once an admirable expression of pluralist tolerance in action, its survival in much of what was once the Ottoman empire, including Israel and Palestine, grates against 21st century reality and aspirations. This outdated system defines faith as a birth right, no matter how wrongly or incorrectly this may describe a person’s actual convictions.

In Egypt, this means that my identity papers say that I am a “Muslim” – which I partly am, in the cultural sense of the word. In addition, given the legal assumption that the son of a Muslim man is also, by default, a Muslim, Iskander, regardless of his actual beliefs, would still be a Muslim in the state’s eye. If Iskander rejects Islam or religion in general, this could result in the surreal situation where two generations of non-believers are still officially defined as Muslim – a situation not unlike that of the historian Shlomo Sand in Israel, who is a third-generation non-believer, but cannot change his ID card to reflect this.

However, the sands may be slowly shifting: the well-known writer Yoram Kaniuk has won the right in the courts to be registered as “without religion”.

Our refusal to predefine our son’s convictions have made me so far reluctant to register Iskander’s birth in Egypt, in the hopes that one day the religion field will disappear from birth certificates and IDs, or until I find a legal means to keep it blank.

However, even if the state becomes more amenable to diversity – which seems unlikely under the current Islamist stewardship but is conceivable under new management given the  protection of personal freedoms guaranteed by the new constitution – society as a whole will not necessarily follow suit.

In Egypt, especially in traditional and conservative circles, the idea that religious identity is inherited runs deep, both among Muslims and Christians, and the traditional model of tolerance is to live as good neighbours and friends but not generally to intermarry. That said, I have met a number of conservative Muslims who accept the rights of other Muslims to convert and even to become atheists.

More troublingly, the increasing marginalisation of Christians in society and their targeting by Islamic extremists bodes ill if the country fails to rediscover its pluralism. For Iskander, this could be problematic if he decides to pursue his Christian identity or, worst, in the eyes of society, abandons religion altogether. And even if he chooses to become a Muslim, it would cause him to feel shame towards an integral part of his personal heritage.

But our son’s mixed heritage is not just potentially problematic in the Middle East, it can also cause him difficulty in Europe. Although European society has evolved into a multicultural kaleidoscope which, at its best, is incredibly tolerant and accepting of diversity, there are numerous worrying undercurrents.

Here in Belgium, the law guarantees equality regardless of background and people possess the legal freedom – both nationally and at the EU level – to choose the belief system that suits them. Moreover, the apparent unceremonious death of organised religion has left questions of faith almost completely in the private and personal sphere.

But even if Christianity has to a large extent fallen by the wayside, Christian rituals have been secularised, as reflected in the enduring popularity of Catholic sacraments, such as baptism and confirmation. Moreover, for some, old Christian prejudices have combined with secular distrust of religion or old-fashioned racism, to stigmatise Muslims. This manifests itself in the increasing mainstreaming of Islamophobia, as well as xenophobia in general.

The trouble with the push towards greater monocultural conformity, whether in Europe or the Middle East, is that the rolling boulder of intolerance gathers no nuance as it hurtles down the slippery slope to ever-greater rejection. Today’s “in” could easily become tomorrow’s “other”, as eloquently expressed by pastor Martin Niemöller in his famous “First they came for…” statement.

This is reflected in how certain salafist groups devolved from the rejection of the non-Muslim other to declaring Muslims who have a different interpretation of Islam to theirs as the enemy within. It can also be seen in how extremist settlers have widened their attacks on Palestinians, to target Jewish-Israeli peace activists and even the Israeli army, as well as the growing segregation between the religious and secular within Israeli society.

For the sake of my son, and all our children, I hope that multiculturalism prevails. In this, we can takea leaf out of Iskander’s book, who shares his affections indiscriminately, based solely on a person’s individual merit, without regard to nationality, religion, gender, ethnicity or creed.

This article first appeared in Haaretz on 23 April 2013.