Landmine survivors call on governments to live up to their Mine Ban Treaty promises. 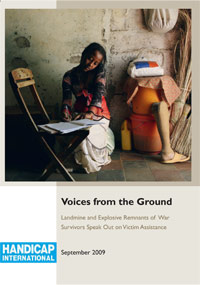 Geneva and Brussels, 2 September 2009 – A groundbreaking new report, Voices from the Ground, shows that, despite progress in stockpile destruction and landmine clearance, governments around the world are not living up to their promises to treat and reintegrate landmine survivors into society. Ten years after the Mine Ban Treaty (MBT) entered into force, 67% of survivors feel that their needs have not been taken into account by national victim assistance plans. The call on governments to implement the Mine Ban Treaty and report release coincide with the start of the Second Preparatory Meeting in Geneva Sept 3-4, when around 150 countries meet to map out the global mine ban action plan for the next five years.

“I want to live with hope, I believe that I have a chance for a normal life, I wish to fulfil my dreams and obligations like all my village friends,”said Korab Mula, a 27 year old survivor from Albania who lost his two arms and injured both legs when he stepped on a landmine in 2000. Albania is one of the few countries where progress was reported.

The report, Voices from the Ground – Landmine and Explosive Remnants of War Survivors Speak out on Victim Assistance, was released globally by Handicap International and other members of the International Campaign to Ban Landmines around the world. It is the first ever report surveying survivors’ opinions on assistance. The survey was completed in July 2009 and includes questionnaires and data from 1,645 survivors in 25 affected countries.

The report finds that survivors are rarely included in decisions and activities destined to benefit them, subsequently more than two-thirds thinks that their needs are not taken into account when their governments makes plans to assist them. This lack of inclusion explains why a majority of survivors think that their governments lack the political will to provide assistance to them.

“It is not enough for countries to destroy stockpiles and clear the land, they must also help the people who survived the explosions and now live in the lands and include them in the decision making process,” said Marc Joolen Director-General of Handicap International (HI) in Belgium. “People living in rural areas need affordable help near their homes and survivors everywhere clearly want the opportunity to get a job and rebuild their lives.”

Survivors are left to battle discrimination and have to compete with many other vulnerable groups for a limited number of services. Despite improvements in medical care and physical rehabilitation, most survivors still have to fall back on their families and friends for support and by far the biggest need is for employment and educational opportunities. Report findings on the lack of victim assistance include:

The MBT is the first international disarmament accord requiring the international community to provide “victim assistance”. Although all States Parties are “in a position” to provide assistance to survivors, the report finds that less than a quarter of survivors have seen any progress in their day to day situation.

“The challenges are daunting and long-term, and survivors are very aware that they are just one of their countries’ many competing priorities, but they also clearly indicate states have not provided what is important to them,” adds Katleen Maes, the report’s lead researcher and research coordinator at Handicap International in Belgium.

Notes for the editor

“Voices from the Ground: Landmine and Explosive Remnants of War Survivors Speak Out on Victim Assistance” is the first ever report surveying survivors’ opinions on assistance in the most affected countries. 1,645 survivors from 25 of the 26 countries declaring responsibility for the greatest numbers of survivors responded anonymously to a detailed questionnaire assessing progress to the 2005-2009 Nairobi Action Plan of the Mine Ban Treaty.

The Mine Ban Treaty is the first international disarmament agreement requiring that the international community assists the hundreds of thousands of survivors around the world – a concept known as ‘victim assistance’.  Hailed as “a historic victory for the weak and vulnerable of our world,” the MBT represented a vital promise to those who have suffered the consequences of these indiscriminate weapons.

Handicap International’s Brussels-based Policy Unit has since 2001 conducted systematic advocacy and research on the human impact of landmines, cluster munitions, and other explosive remnants of war, as well as on efforts to assist survivors, their families, and affected communities. It also coordinates research on victim assistance and risk education for the Landmine Monitor. In all its work it favours a bottom-up approach and direct involvement of those affected. Handicap International is a founding member of the International Campaign to Ban Landmines (ICBL), 1997 Nobel Peace Prize co-laureate for its work on landmines.

The ICBL is a global network in over 70 countries that works for a world free of antipersonnel landmines and cluster munitions, where survivors can lead fulfilling lives by advocating for the words of the Mine Ban Treaty to become a reality. The ICBL and its victim assistance focal points from several of the 26 countries with the greatest numbers of survivors joined forces with HI to provide an opportunity for the voices of survivors, their families and communities to be heard.

The meaning of zero has changed a lot since I left school. twitter.com/AFP/status/152…

Like other white supremacists, Payton Gendron reportedly believed in the Great Replacement conspiracy theory, a dangerous lie with deadly consequences Needless to say, there is NO white genocide and white people are NOT being persecuted. #Buffalo chronikler.com/europe/usa/whi…

"COP27 will be an inclusive COP where all actors will be... afforded the needed platform to voice their views," claims Egypt's foreign minister, Sameh Shoukry. Does "all actors" include jailed Egyptian activists and how will they "voice their views" from behind bars?

After his killing spree, Payton Gendron was going to shoot himself in the neck but police talked him down, before arresting him. This is how policing should be. If only unarmed black Americans were treated with the same respect for human life. #BuffaloNY #BlackLivesMatter

The reprehensible terrorist attack in Buffalo, New York, illustrates how Donald Trump may be gone but toxic white supremacy continues to poison America because Trump was a symptom of a deeper socio-economic and political malaise, not its cause. #BlackLivesMatter #WhiteSupremacy

@amgechter That's the problem: many kids cannot afford to bring their own food to school, so miss lunch, or they get cheap junk like crisps because their parents can't afford to give them healthy food.

Shireen Abu Aqleh was unable to reach her final resting place in peace, and Palestinians were unable to mourn unharassed. In a just world, a shocking scene like this should be the final nail in the coffin of the Israeli occupation. #Shireen_Abu_Akleh pic.twitter.com/qmUIIT5i1Z

As prices and poverty rise, as many as one in four children in Belgian schools go without lunch, experts estimate (no official statistics exist). That children should go hungry in one of the world's wealthiest countries is unacceptable and shameful. We need free school lunches

If the sight of a Palestinian flag causes Israeli forces to attack the funeral procession of a slain journalist, leading Shireen Abu Aqleh's coffin to fall to the ground, then the prospects for peace are dimmer than ever. Disgusting disrespect. #ShireenAbuAkleh #شيرين_أبوعاقلة

@DiabolicalIdea See, the problem is with *recreational* energy drink use. :>) For actual endurance athletes, they're a big help. But since I'm long-retired from triathlon, yeah, just gimme coffee.