Google doodles must be the most fleeting yet highly visited exhibition on the planet honouring both the famous and the quirky. 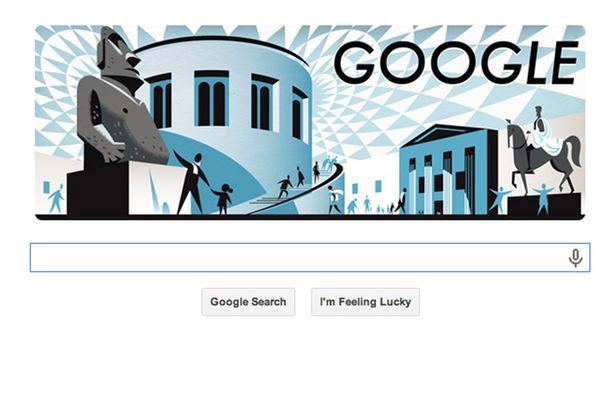 This year is the 255th anniversary of the British Museum. It’s not exactly a milestone year in the grand scheme of things, but clearly grand enough to be honoured with a Google doodle in January.

Any excuse for a great doodle is a good one in my book. And if I hadn’t tried the ‘I’m Feeling Lucky’ search option on Google I would never have learned about it.

Ever since Google first entered our computer screens – quickly followed by our lexicon and now our consciousness – I’ve been tempted but never acted out on the urge to press the ‘I’m Feeling Lucky’ button.

Until today, I’d never given this reticence much thought. But as I warm up to a day of work and I open my explorer with the default Google screen whirring to life, only to see yet another fascinating interpretation of the World Cup 2014, I begin to wonder what creative machinery must be behind this constant output by the search giant.

Do they sit down once a year or once a month and map out a calendar of milestones and lesser, sometimes quirky, events to honour with possibly the most fleeting but highly visited exhibition on the planet? I’d like to think, yes. One day and XX millions of online denizens are treated to a lesson in history or culture or the banal. And it’s all fine by me. The more obscure the better.

I’ve also never really explored why I haven’t tried my luck on this odd little feature, which I dare say is a legacy of the first designs of Google, where the developers were not sure if people would know what they were looking for on this big bad web, let alone how to enter the search words in the simple little field they provided. So a bright spark says, “Let’s give them a sample or a demo but we can make it like a roll of the dice … to get them hooked on our tool!”

Well, if that were true, they needn’t have worried. We’re hooked. Not by the idea of ‘feeling lucky’ but by the sheer unchanging simplicity and, indeed, beauty and form of this tool. Sure, Google is much more than a simple search screen now. We’re waiting for driverless Google taxis and enjoy a whole host of other ‘Drive’ related tools through the cloud.

But it is the search – the deep calling for knowledge now literally at our fingertips – that keeps us coming back. And in that there is a degree of excitement still. It’s not so much down to luck any more as we’ve learned how to trick the big machine into delivering pretty much what we want in the first few listed results. We do all sorts of Boolean mind tricks (I looked that up on Google!) on it and it probably reluctantly coughs up what we’re looking for with a couple of paid-for gems on top.

And yet that little ‘I’m Feeling Lucky’ button stays in-situ as some kind of ode – to what I’m not really certain. Maybe it’s an ode to simpler times, or an ode to the randomness of life, or to the copywriter who first thought of this funny little phrase. Maybe it’s an ode to philosophy or to modern mantras that challenge our grasp of reality. Maybe it’s a tacit ode to Nassim Nicholas Taleb’s book Fooled by Randomness: The hidden role of chance in life and in the markets. Or maybe it’s just a case of dumb luck, a whim that stuck.

I don’t know – I’m not on Google’s board or anyone else’s – but I do know that today I decided to try my hand. Maybe I was bored, maybe I was overcome with wonder at the fresh doodle every day for the World Cup, or maybe because it’s a Tuesday and that’s a lucky day, if there ever was one. So, I hovered for a second and then pressed I’m Feeling Lucky. It felt good.

And you know what I got? The back-catalogue of doodles in one beautiful long list with the dates and event being immortalised by this Google feature.

I’m not sure what role luck played in this result, but I’m pretty happy with it. I scrolled down a few screens, learned about Mary Anning, a struggling English palaeontologist. I discovered the Columbian painter/sculptor Alejandro Obregón and the obscure Japanese ‘Go’ (a board game I think) champion Honinbo Shusaku. I caught up on recent national days and the European elections. And I realised my family missed Father’s Day!

But the doodle that took my eye, if not my fancy, was the anniversary of the British Museum. Every time I visit the great city of London, I try to take an hour or so to stroll through a couple of the rooms in this national treasure trove. I love that it’s still free, when very little else is these days. It reminds me of my back-packing days where anything free that involved warmth and comfort was worth seeking out.

Two decades ago I wrote a cheesy little story (I was young) in a scrappy notebook while propped in front of a figurine of Anubis in the Egyptian chamber. I’ll share it with if you ask nicely. I know the museum has some detractors and some explaining to do about how it obtained – and, well, chooses to keep – some of the treasures, but as a casual seeker of knowledge, a visitor who likes to try his luck every now and then, the British Museum is truly a worthy find. Thanks Google. You’ve made my day.