The subtext of the bestselling novel, The Imperfectionists, is elusive… But could it have something to do with the imperfections of modern Western society? 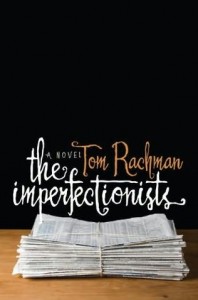 The New York Times describes Tom Rachman’s bestseller, The Imperfectionists, as “nothing short of spectacular”. It’s a big rap for the former journalist’s debut novel, but much deserved. Problem is, I can’t work out who or what is supposed to be imperfect. Perhaps it’s me.

I guess I’m struggling with the subtext of the story, or perhaps there simply isn’t one. The book is really an ensemble of mini-stories brought together through eleven characters and their association with a declining English-language newspaper. The parallels with Europe’s own ignoble slide and that of the traditional print media are certainly hard to ignore as candidate ‘subtexts’.

Rachman appears to have erected a Dorian Gray-esque full-length mirror in which we – the reader, old Europe, print journalism… – get to see every wrinkle, every inadequacy, every (hidden) imperfection.

“The Impefectionists is a splendid original, filled with wit and structured so ingeniously that figuring out where the author is headed is half the reader’s fun,” writesTimes.

‘Fun’ isn’t the word I’d choose to describe the reader’s journey, but to each their own. But I do agree that it is quite ingeniously crafted, and I love how each new character is parachuted in from the first words and seamlessly brought in line with the wider storyline before landing beautifully.

While I would happily reel off a number of other book review-ish observations, I feel more compelled to draw out this baffling subtext question. And after reading the feature story, entitled ‘The French Disconnection’, in this week’s Time magazine I get the definite scent of a lead.

Hessel exhorts France, in particular its youth, to “recapture the spirit that fuelled the war-time resistance of the Nazis and mount a ‘peaceful insurrection’ against injustice, ‘mass consumption, the disdain of the weak and of culture, general amnesia and the endless competition of all against all’”.

The pamphlet basically rails against the sort of “populist appeals” not, according to Time, witnessed in half a century in France. One might equally say these populist – and in parts right-leaning politics – are not exclusive to France, as highlighted in The Chronikler’s spotlight on the far right. The economic and social strains facing Europe today embolden populist and right-wing rhetoric.

“What’s new and unusual [compared to the extreme-right rhetoric of the past in France] is that that rhetoric has become mainstream. In the process, it reveals a lot about the unsettled state of France today, a country that feels victimised by a changing world, economically stagnant and poorly governed,” observes Time.

To my mind, this statement could just as easily be applied to Greece, Spain, Portugal and lastly Italy, the fictional home to Rachman’s dying newspaper.

Founded in Rome in the 1950s, the paper rides the post-war internationalisation of Europe and manages to build a strong and loyal readership. But like its host nation, and arguably the wider region, the hapless paper misses opportunities to modernise and innovate. It struggles to find meaning and value in global society.

There is also perhaps a touch of irony in that the newspaper is owned and run by Americans – a nation that values and usually successfully capitalises on just such opportunities.

Could this be the imperfection implied in Rachman’s title? How can this band of outcast American journalists and editors strive for perfection in such an imperfect setting?

Let me off the hook, will you … read the book and tell me know who the imperfectionists are!