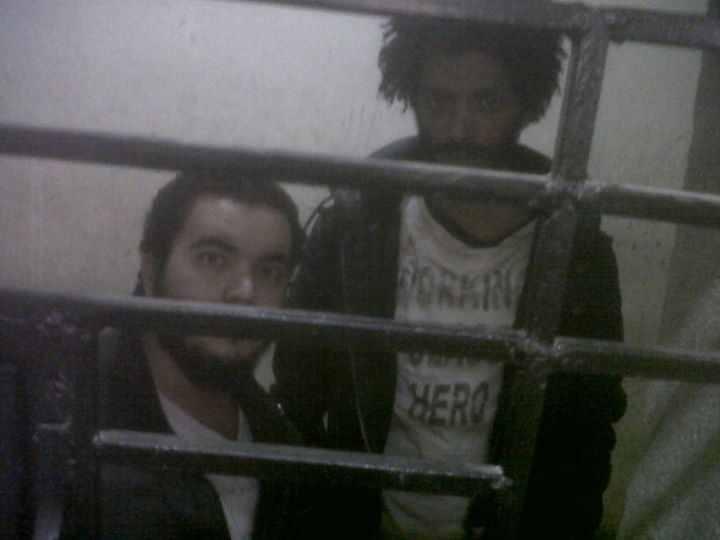 Mohammed Jamal, the lead singer of the popular Egyptian indie band Salalem, tells The Chronikler his story about a night of hell in police custody.

I thought it over carefully before deciding to write about this humiliating incident – an incident that has no rhyme or reason to it, but reflects the reality that the police force still needs to be completely cleansed of the corrupt Mubarak-era officers who still think they are free to hurt the dignity of anyone they simply don’t like. My friend and band mate Walkman and I were victims of these immoral cops.

We were heading home one night after our concert at the Cairo Jazz Club, where we had performed with the Canadian singer NEeMA, when we approached an ordinary police checkpoint. The police signalled for us to pull over and politely asked to see my driving licence and our identification cards – which we handed over, also politely. They then asked to search the car and search us and, out of politeness, we let them. After they were done and had not found anything illegal or suspicious on us, they allowed us to continue on our way, and we did.

Shortly after I drove off, I realised that I hadn’t taken back my ID card from the police officer who had searched us. Just to be certain, we searched the car first for the card, and when we couldn’t find it, we decided to return to retrieve it.

Back at the checkpoint, we tried to find the policemen who had searched the car (it was busy and there were a lot of cars being checked over). When I found the officer in question, he insisted that he had given it back to me and then asked me to park because I was blocking the traffic and that he would come and search the car with me for it. Meanwhile, Walkman had wandered off to ask other if they have seen my ID. As I was searching the car with the officer, Walkman innocently asked another policeman about my ID, which he somehow took personally as an accusation of theft and proceeded, with a gang of other coppersm to kick and punch Walkman. When I came to Walkman’s aid, the police turned mercilessly on me too.

Our attempts to arrest the blows flying at us were futile. After a long session of beatings, we were dragged to a waiting police car. They confiscated my car and our phones. On the way to the police station, a police officer handed me my ID and told me, “Here you go, your card”. When we reached the station, we were already in complete shock and awe from what had just happened to us – something we had never experienced before. They walked us to a room in which there was a miserable, low-ranking officer from the remnants of the former regime. No one touched us in the police station but they were very generous with the swearing and insults.

By this stage, we were already so depressed and humiliated that the names they were calling us had no affect. We were also accompanied by a large number of serious criminals, many of whom seemed to be friends with the cops and they all had a laugh together.

The officer then approached us and said, “Fuck the revolution that made you think you could mistreat police officers. Why the fuck am I being drained on the streets all day. Isn’t it for you? What a fucking revolution.” He then sent his colleague off to write a police report to “screw us” with. The other officer then opened a drawer and got out a big knife, a bar of hashish, and some paper and left. About an hour later, he came back with a closed envelope, the big knife and a written paper. We later learnt that they hqd fabricated a police report accusing us of possessing two grams of hashish, a big knife, and attacking a police officer while on duty.

We were eventually taken to a middle-ranking police officer who was very respectful. He apologised to us when he heard the story and knew we were respectable people but he all he managed to do was to order the guard to keep us apart from the serious criminals until we were transferred in the morning to the prosecutor’s office. He allowed us to use our phones and to ask our families to hire a lawyer. First thing I did was to tweet because I didn’t know who to call at 6am. Walkman called his brother and asked him to come with a lawyer to the prosecutor’s office.

Handcuffed, we were taken to the prosecutor’s office in a police van full of criminals and our sense of humiliation was growing but we remained silent, thinking silence was the smart thing to do.

All we wanted at this stage was for the investigation to pass so that we would be released, whereupon we could think about how to regain our rights. A decent lawyer came to our aid and the prosecutor was also very respectful. He tried to explain that what had happened was because we looked “weird” and that our attitude as musicians might have provoked the officer. Unfortunately, that’s the mindset many in the police force have. We were released on LE400 bail and now Walkman and I are charged with three quite serious crimes.

Even though I am facing these serious charges, I will not be silenced, and neither will Walkman, until this officer is sacked. I will not be silenced and this is why I wrote this note and decided to post these pictures because no one should go through this and be silenced. The cleaning up of the police force might be a lengthy and difficult process but it is not an impossible one.

This text was originally written in Arabic. Translated by Osama Diab,.